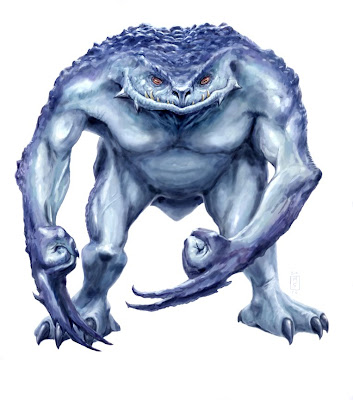 This was for fun. Although I usually work in oils, I've been trying to teach myself digital painting lately. I use photoshop for color studies right now, but I haven't reached the point where I could do a finished piece entirely digitally. Its a Blue Slaad, a classic Dungeons and Dragons monster that I took from my sketchbook. I don't know how successful an illustration of a vicious beast it could be when my wife Gina says it looks cute. 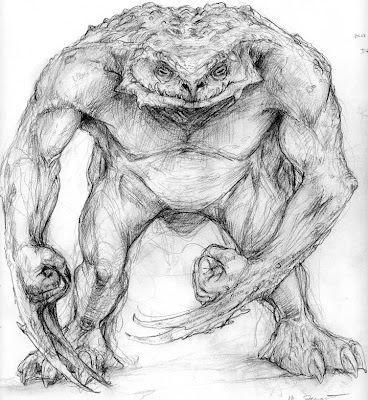 Worldwake, the second set of the Zendikar block of Magic: The Gathering was released a couple of weeks ago, so I can show these. Zendikar is a world where gravity doesn't always act in a predictable way, hence all the hooks and rings on the clothing and gear of its inhabitants which was fun to paint. 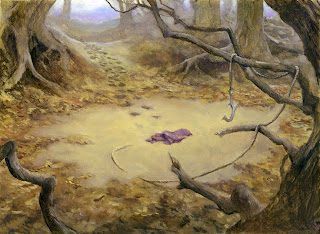 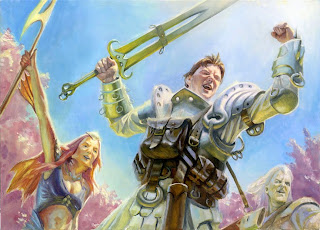 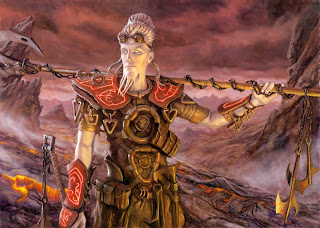 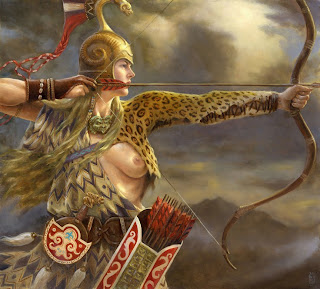 After much procrastination, I’m finally getting off my duff and starting my blog. It’s mainly a way for me to show everybody what I’m up to.

Here’s a painting I just finished called Daughter of Aries, for an art show and fundraiser called Beautiful Grim. The show benefits Kat, the girlfriend of a fellow artist, Daarken, who at 25 was diagnosed with breast cancer. The auction of painting and prints will help them with the resulting medical bills along with aiding some cancer research charities. The artists taking part were asked to intepret the theme “Beautiful Grim” in whichever way they chose.

I chose to depict the myth of the Amazons, the female warriors from Homer’s Iliad. The title Daughter of Aries refers to the Amazons’ association with the Greek God Aries. This painting was an opportunity for me to blend fantasy, myth and history. I was itching to paint something related to Amazons after watching a PBS documentary called Secrets of the Dead: Amazon Warrior Women. It was about the discovery of the 2,300 year-old skeletal remains of a warrior priestess in a tomb on the Russian steppes. The locations of tombs roughly correlate to where Herodotus placed the legendary warriors, on the borders of ancient Scythia. These women could have been the inspiration of Homer’s Amazons. The make of objects found in the tomb, including decorative patterns, is similar to those found in Central Asian and Mongolian design. The archaeologists–and this was the really cool part of the show–were even able to match the DNA of the remains in the tomb to a young curiously blond-haired girl living in present day Mongolia.

The painting is also informed by the more mythological aspects of the Amazons. The Archer’s left breast is exposed and she wears a tunic with a zig zag pattern. This alludes to depictions of Amazons on Greek pottery. Her right breast is covered, and might have been removed, refering to the legend that Amazons cut or burned off their right breast so that they could shoot their bows and throw their spears better. The quiver and the mirror hanging from her belt are Scythian.

Along with allowing me to indulge in my love for history and myth, the Amazon encompasses the theme of “beautiful grim.” She is grim in that she is a fierce, yet scarred warrior, and she is beautiful and courageous.