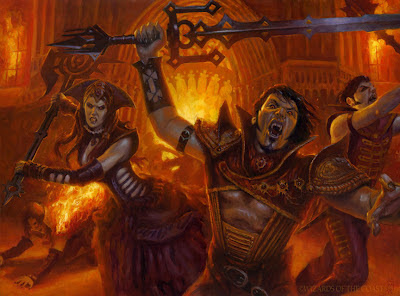 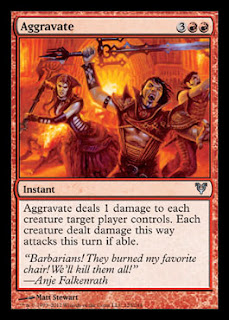 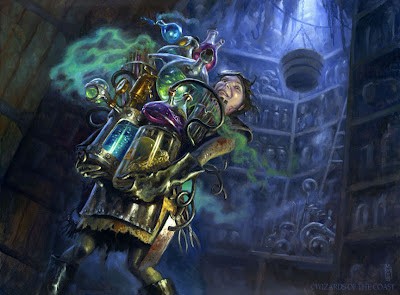 Another piece for Avacyn Restored.  Painting someone more or less unhinged was fun. I was worried that she would come of as just happy and not crazy, but I think I got the expression right. I also enjoyed painting the different colors and degrees of viscosity of the liquids in the jars. 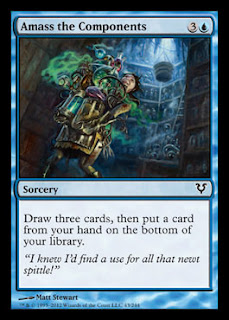 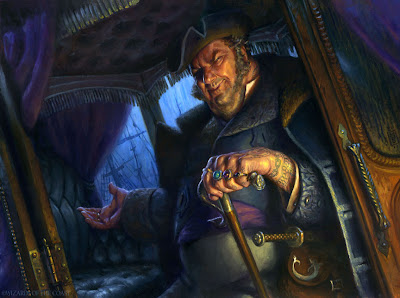 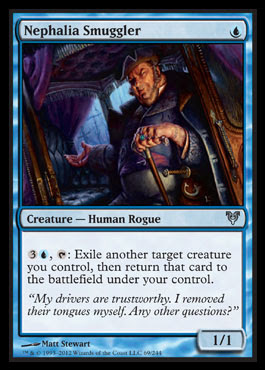 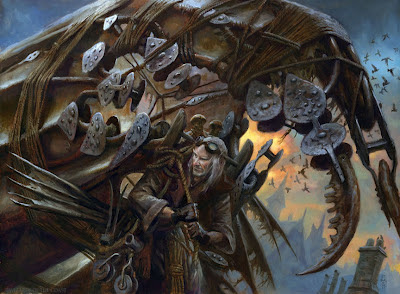 Back in Innistrad set of Magic:The Gathering, I illustrated a card called Cobbled Wings. For the upcoming set Avacyn Restored set, I was given a chance to revisit the subject in Wingcrafter. We see the same inventor earlier that same day. It's dusk. He is dragging his ghastly flying contraption to the roof above his workshop. It's folded up on his back and needs some assembly before flight. It's still a couple hours before he takes his leap into the night above the coastal city of Nephalia.

In Magic:the Gathering, there are different types of cards; creatures, spells, artifacts, tokens, and lands. One should be able to tell the type of card from the illustration as much as possible. Spell cards should show the action of that spell. A creature card should focus on that creature, and so on. Cobbled Wings was an "artifact" card, and illustration focused on the flying wings. Wingcrafter is a "creature" card, so the illustration should be about the pilot. 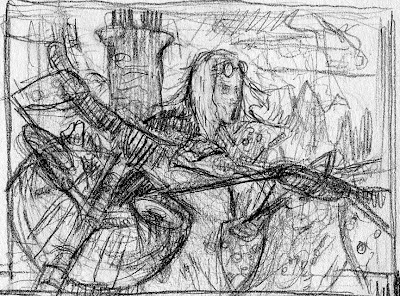 Initially I was going to do a portrait. I love painting people, and not just beautiful people, but real looking people of different ages, types, etc. I wanted to cast what I thought a hermit-genius should look like. I love playing casting director. Above is my first idea.
The art description, however, asked that inventor be shown carrying his wings, "folded, and slung over his shoulder". The thumbnail idea above doesn't show that. In fact it looks like he's carrying a big kite, rather than the flying wings. 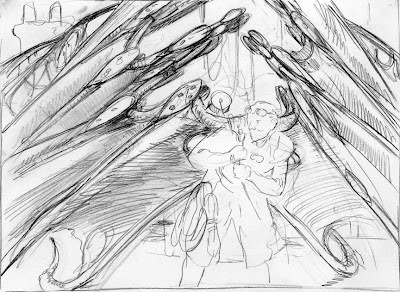 More of the wings needed to be seen, slung over his shoulder, folded in some way. When I designed the wings earlier for Cobbled Wings, I thought maybe they could fold up kind of like an accordion, but I didn't get that deeply into the conceptual design of it. I was also more concerned with how they looked spread open then closed up. In order to show the wings folded now, I had to push the idea further. How would they it fold? How would the struts articulate? Were there pieces that had to come off? Also, how would the wings be secured to his back, and how would he drag it along before flight? 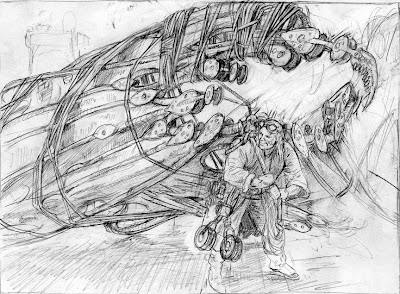 Over the course of days, I went through a number of different ways to solve this. I eventually arrived at the idea above. I was happy with the solution of the wings, but the main problem was that it the composition of the sketch above was more about the wings than the pilot now. More appropriate for another artifact card illustration that a creature card. Back to the drawing board, literally and figuratively. 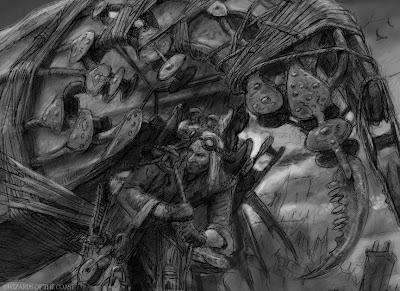 I had to sacrifice some details and move some things around, but I arrived at this version which I felt satisfied all the points I wanted to hit with this piece- the portrait of the man, the ways the wings fold, and some of the location and time of day so that there's a bit of storytelling going on too. 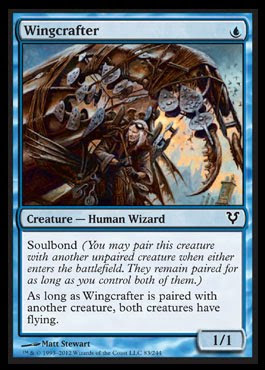 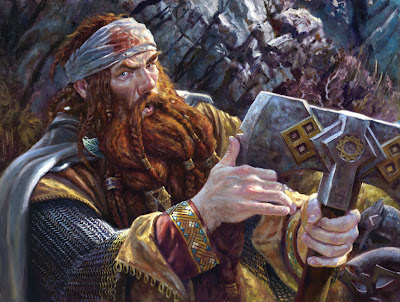 "..and beside them walked Gimli the dwarf. He had no helm, and about his head was a linen band stained with blood; but his voice was loud and strong. 'Forty-two, Master Legolas!' he cried. 'Alas! My axe is notched: the forty-second had an iron collar on his neck. How is it with you?' "