"I knew much and I have learned much" 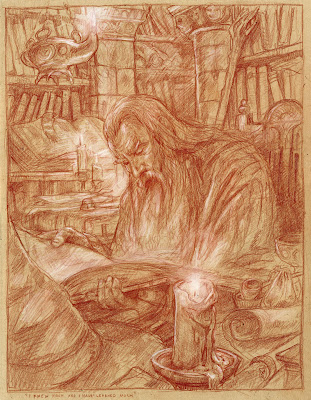 
I'd like to first wish everyone a Happy New Year. One of my resolutions is to not let two months go by between posts. Another is to try to draw more. Not just drawing for preliminaries in service of an eventual painting, but drawings as finished pieces of art.  We'll see how that works out.

I did this one as a Christmas gift for my dad. He posed for my earlier painting of Gandalf, so I thought he'd like it. The title is a quote of Gandalf to Frodo, referring to his investigation of Bilbo's magic ring. It shows the old wizard in the archives of Minas Tirith.

I find the sanguine color on brown paper isn't as stark as a graphite line on white paper, so it is a little softer touch, allowing one to be more aggressive with one's lines. The white also adds a feeling of form that makes it closer to a painting than a pure line drawing. The red pencils also can't be made as sharp as a graphite pencil, so it forces one not to noodle as much, and make more declarative lines. And erasing isn't as easy, so it's harder to make a lot of changes. I have experimented with it before, and hope to do more in the future.

There isn't much reference used here either. I just sat down and let the pencil do the work and waited for what would happen. The exceptions are Gandalf's hands. I took a quick photo with the photo booth application on my iMac for a little help. The other exception is the candle. I drew an earlier candle out of my head, but we had one in our house that I thought looked cooler, so I redrew it.
Posted by Matt Stewart at 12:35 PM