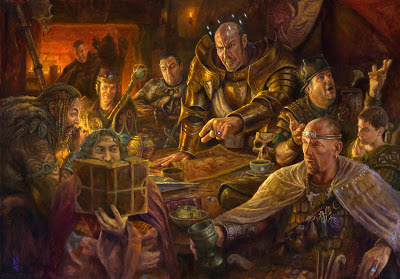 The Lost Hunters
oil on board, 20" x 28"
Usually I have a number of private commissions and personal pieces that I'm always working on in between commercial commissions. The commercial jobs have hard deadlines, and often demand my more immediate attention. So these other works have to spend a little time on the back burner. The Lost Hunters is one of those pieces that spent a lot of time on the back burner...a number of years in fact.
It's a portrait of a long time group of friends as their Dungeons and Dragons characters. The group played with these same characters for over 20 years.  My link to the group is my brother-in-law Chris. He's the guy with the pot on his head, which isn't a reference to anything other than his character actually wore a small cauldron on his head in many of the adventures. You might recognize him as a model in a number of my paintings, most recently as the Knight of Ravnica.
The painting was commissioned as a gift for the Scott, the cloaked figure on the back table. He was always the Dungeon master (the DM isnt a player, but runs the game). Therefore I depicted him as apart from the group, looking on as they argue.


Character studies. Each 9" x 12", red pencil and white chalk on toned paper.
The painting was a balance of fantasy and portraiture. Each character bears the facial likeness of the player, but liberties were taken their physical stature.

I took a more fluid approach in producing this piece. Instead of coming up with a concrete design and gathering reference based on my ideas. I chose to sit in on one of their games. With only a general idea (they should be in a tavern ) I asked them for ideas on what they thought they would like to be doing. I then set up some lights and took some reference shots. Afterwards I sat in on the game to get an idea of the dynamic of their different personalities and how they interacted in the game.
Posted by Matt Stewart at 3:26 PM